The Water Ghost of Harrowby Hall  by John Kendrick Bangs  (1894) 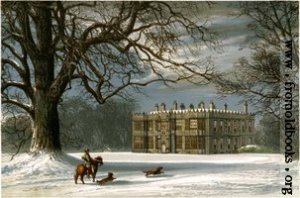 ‘The trouble with Harrowby Hall was that it was haunted …’ writes John Kendrick Bangs, American author/humorist, known at the turn of the  century for his humorous supernatural fiction. He immortalized Bangsian Fantasy, which were spoofs about the afterlife.

This water ghost, a creepy and soggy feminine figure, appears every Christmas Eve at midnight, casting her cavernous blue eyes into the Hall’s owner Henry Hartwick Oglethorpe. She displays her long ‘aqueously bony’ fingers and bits of dripping seaweed while she draws the weedy ends across Henry’s forehead, until he feels nearly insane, swooning and going unconscious, at the same time soaking him thoroughly in seawater. 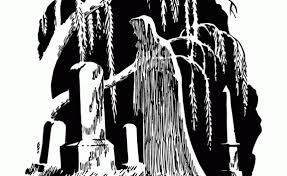 There’s a heartless sea nymph, a curse, a death and Henry’s heir to Harrowby Hall who must deal with the water ghost haunting him every Christmas Eve in this same flooding way. Who wins in this little Christmas tale, man or ghost? The Water Ghost is really quite entertaining and probably a fun story to read aloud. The images are charming and the ghost quite polite actually. A perfect story to sparkle the spirit on this Christmas Eve.

You can find it here: http://www.eastoftheweb.com/short-stories/UBooks/WateGhos.shtml

Listen to the narration by Librivox http://www.youtube.com/watch?v=TIJf_4_wwa8

Other  stories by Bang:

Thurlow’s Christmas Story (1894)  Short story is published in Ghosts: A Treasury of Chilling Tales of Old & New by Marvin Kaye, at your library or on Amazon.com

Ghosts I Have Met and Some Others (1898) Paperback on Amazon.com

2 responses to “The Water Ghost, A Christmas Eve Tale”