Skulls in the Stars: Solomon Kane

How’s your imagination these days? Looking for something fiendish? 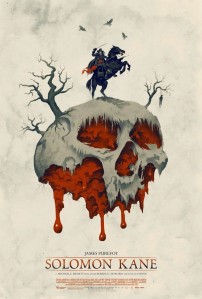 In Skulls in the Stars, our character Solomon Kane attempts to cross the moor road on his way to Torkertown. The villagers have warned him of an evil haunting on the moors. Something wicked is killing the travelers and the deaths are as gruesome as one could not imagine. Kane is advised to take the swamp road. But if you know anything about the adventurous Solomon Kane (a Puritan of high faith and dedicated to defeating evil), meeting up with Satan himself would not deter this man. What does Kane meet on the moors?

“…a thing that had once been a man—a gore-covered, frightful thing that fell at Kane’s feet and writhed and groveled and raised its terrible face to the rising moon, and gibbered and yammered, and fell down again and died in its own blood.”

… “The moon began to rise, lean and haggard, like a skull among the stars.” 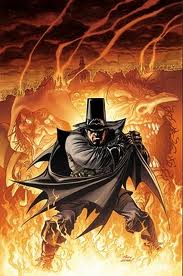 If you like your horror full throttle, this is it. Robert E. Howard writes a thrilling story, saturated with descriptions of this beast and its victims. Truly nightmarish. A virtual exercise in evil vs. courage. I actually needed some of Kane’s courage to finish reading this story (as you know I’m more the quiet horror type). This story did in fact give me a nightmare; I woke up screaming. I admit this story made me feel like a kid again, reading the scariest story, being haunted by the images, and afraid to shut the bedroom lights off. Are you laughing?

We all know author Robert E. Howard for his famous character Conan the Barbarian, and sword and sorcery genre. Most of the Solomon Kane stories were published in Weird Tales at the height of pulp fiction era. Here is the official Solomon Kane Web site: http://www.solomonkanethemovie.com/ 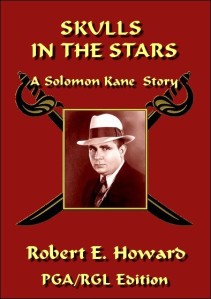 Read the short story at Gutenberg.net Australia  (and do keep the lights on).

Another of Howard’s titles is Moon of the Skulls: African jungle story where Solomon Kane seeks the vampire queen of Negari: crags dark and forbidding with impenetrable blackness, a virgin on a Black Altar, a tower of death, Babel of bestial screams, blood drenched brains  … I didn’t make it through this one. But you might.

Read Moon of the Skulls at Gutenberg.net

4 responses to “Skulls in the Stars: Solomon Kane”