Ghost in the Machine

Do you believe in the theory of a ‘Ghost in the Machine,’ as British philosopher Gilbert Ryle coined the term in describing Descartes’ mind-body dualism (mind distinct from the body)? This is the belief that there is a non-biological entity underlying consciousness (the soul or spirit). Neuroscientists will argue that we are solely our physical brains trapped inside our own heads and nothing more than that. Jack Snow’s story Midnight brings up the questions: Are we sometimes operated by otherworldly phantoms—if we desire to call them up? Is there an immaterial realm we might tap into—if we desire to enter? 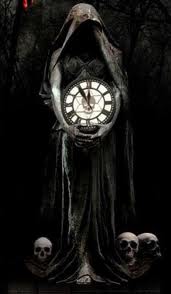 What if there is a ghost in the human machine? And what if that ghost has evil powers?

Meet John Ware who believes that the stroke of midnight has otherworldly powers and he wants in. He has an insatiable craving to know and experience evil directly. Ancient cults and their powerful secrets do not frighten him. So, he adventures into the darkest of realms. In his chamber is an old clock as tall as any person and owned by various Satanists, wizards, and alchemists. John stands before this clock at the stroke of midnight, his body etched with cabalistic markings, chanting unhuman phrases, and dancing grotesque gyrations as he steps into this mysterious band of time.

Do you think time ever stops?

Or are the grains of time an eternal abyss of madness? Tick-tock.

Jack Snow (1907-1956) has written some twenty short stories and spectral tales as well as a fiction series called Oz Universe.

You can read Midnight at StoryOfTheWeek: scroll to download the PDF.

Every once in a while I come across a newly released anthology that I really like. Most of the time I’m in the old books but here a new anthology edited by Richard Thomas, The New Black. The selection of authors is impressive if  you’d like to experience some of today’s dark fiction writers.

The New Black is a collection of twenty neo-noir stories exemplifying the best authors currently writing in this dark sub-genre. A mixture of horror, crime, fantasy, science fiction, magical realism, and the grotesque—all with a literary bent—these stories are the future of genre-bending fiction.

REVIEW: “The New Black ought to be the New High Standard for dark fiction anthologies. It’s loaded with intelligence and talent. Every one of the pieces in this extraordinary compilation is worthy of your full attention.”   —Jack Ketchum

7 responses to “Ghost in the Machine”