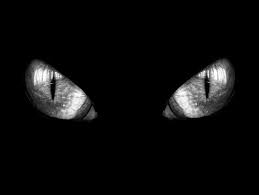 Halloween is this week. What if you didn’t go trick-or-treating or didn’t answer your doorbell to the playful ghosts and witches? What if you stayed locked in your home, alone, and entertained the darkness on this oh-so-hallowed night. What consciousness of the dead would conspire to make your acquaintance? How brave are you?

Edgar Allan Poe knew the power of being alone. He knew the power of the imagination. He knew the power of death. His characters were masters at conjuring up palpable and mysterious presences. A Tale of the Ragged Mountains is a less popular short story from the Poe collection that I’m betting many here haven’t read. This story is about Augustus Bedloe who travels alone a mountain in Charlottesville in a thick and peculiar mist. 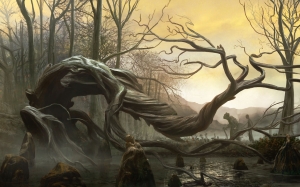 “Busied in this, I walked on for several hours, during which the mist deepened around me to so great an extent that at length I was reduced to an absolute groping of the way. And now an indescribable uneasiness possessed me–a species of nervous hesitation and tremor. I feared to tread, lest I should be precipitated into some abyss. I remembered, too, strange stories told about these Ragged Hills, and of the uncouth and fierce races of men who tenanted their groves and caverns. A thousand vague fancies oppressed and disconcerted me–fancies the more distressing because vague. Very suddenly my attention was arrested by the loud beating of a drum.”

What happens to Bedloe alone on this mountain? This is a story of mesmerism, disembodiment and reembodiment, bizarre encounters, and death. Perfect for a Halloween read because there is no Halloween without the macabre adventures of Poe.

A Tale of the Ragged Mountains by Edgar Allan Poe (1844)

In keeping with this theme of solitude, Poe also wrote the following poem Alone, which I’ve posted here. Quite revealing, this poem expresses what it is to love alone and what it might bring.

From childhood’s hour I have not been
As others were; I have not seen
As others saw; I could not bring
My passions from a common spring.
From the same source I have not taken
My sorrow; I could not awaken
My heart to joy at the same tone;
And all I loved, I loved alone.
Then- in my childhood, in the dawn
Of a most stormy life- was drawn
From every depth of good and ill
The mystery which binds me still:
From the torrent, or the fountain,
From the red cliff of the mountain,
From the sun that round me rolled
In its autumn tint of gold,
From the lightning in the sky
As it passed me flying by,
From the thunder and the storm,
And the cloud that took the form
(When the rest of Heaven was blue)
Of a demon in my view.

Lastly, I want to give you Poe’s final story, just before his sudden death. Poe began a manuscript titled The Light-House. Unfinished and unpublished, this is the story of a man with a passion for solitude, who goes to live at the edge of the sea in a lighthouse. Poe wrote only four paragraphs.

“My spirits are beginning to revive already, at the mere thought of being — for once in my life at least — thoroughly alone …”

Read The Light-House at E.A. Poe.org.

Poe’s biographies tell of his great misery and tragedies as well as loneliness. We think of solitude and loneliness as walls that shut out the world. For Poe, the aloneness may have acted as a bridge to his necromantic literature. A master of dark fiction, Poe died, October 7, 1849 at Washington Hospital. His last words, “Lord, help my poor soul.”

7 responses to “Darkness of Solitude on Halloween: Edgar Allan Poe”