AUTHOR OF THE WEEK   August 9

“I knew that I wanted to be a writer even before I knew exactly what being a writer entailed.”

“There’s a unique bond of trust between readers and authors that I don’t believe exists in any other art form; as a reader, I trust a novelist to give me his or her best effort, however flawed.”

“I find that I write more slowly and carefully, even as the deadlines come more frequently. I’ve never been satisfied with the final form of any of my work, but the dissatisfaction may be deeper now — even as some of the quality goes up — because I know I have fewer years ahead of me in which to improve and make-up for my shortcomings.”

Dan Simmons (Born 1948)  is a multi-award winning American author.  His first novel, Song of Kali, won the World Fantasy Award; his first science fiction novel, Hyperion, won the Hugo Award. Most readers know him for winning four Bram Stoker Awards, among many other fiction prizes. One of his favorite authors is Charles Dickens (Drood). His short story The River Styx Runs Upstream was awarded first prize in Twilight Zone Magazine story competition. The Terror and The Abominable are his historical fiction novels.  Stephen King had significant praise for Simmons novels:  “Simmons writes like a hot-rodding angel.”

The Crook Factory is about Ernest Hemingway while living in Cuba in the 1940s. Simmons states in the afterward that 95% of the novel is true. The story is a thrilling plot about an FBI agent and Hemingway’s amateur spy ring called Crook Factory in Cuba at the beginning of WW II. “Simmons spins, the zesty characters it entangles and its intricate cross-weave of fact and fiction .” Publishers Weekly

In A Winter Haunting, college professor and novelist, Dale Stewart,  has been followed to this house of shadows by private demons who are now twisting his reality into horrifying new forms. And a thick, blanketing early snow is starting to fall. 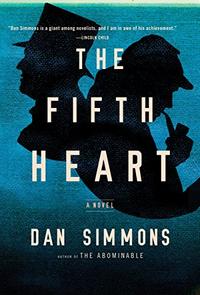 Please join me in my reading nook and discover an author

on Mondays at Reading Fiction Blog!

One response to “Author of the Week, Dan Simmons, August 9”