Here is a perfect story to read aloud for Halloween.  Walter de la Mare is a dazzling author famous for his ghost stories and psychological drama. This is a fast short story and absolutely classic. We have a traveler visiting a deserted cathedral. The cathedral is not just haunted. 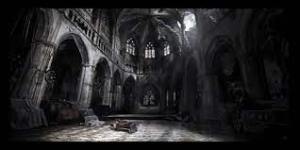 “Devils are creatures made by God, and that for vengeance.”

Why would devils haunt a deserted cathedral?

“We then turned inward once more, ascending yet another spiral staircase. And now the intense darkness had thinned  a little, the groined roof above us becoming faintly discernible. A fresher air softly fanned my cheek; and then trembling fingers groped over my breast, and, cold and bony, clutched my own.”

You got to read this one. Author de la Mare is one of the finest writers of the supernatural.

Walter de la Mare  (1873 – 1956) was an English poet, short story writer, and novelist. He is probably best remembered for his works for children, for his poem “The Listeners”, and for a highly acclaimed selection of subtle psychological horror stories, amongst them Seaton’s Aunt and The Return. He was considered one of modern literature’s chief exemplars of the romantic imagination.

Read All Hallows  at Gutenberg.ca (page 288 in Table of Contents):

Listen to the audio at BBC Radio: 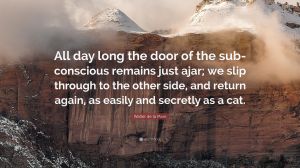 Don’t forget to view the INDEX OF AUTHORS’ TALES above for more free reading at Reading Fiction Blog. This is a compendium of over 250 short stories by more than 150 famous storytellers of mystery, suspense, supernatural, ghost stories, crime, sci-fi, romance, ‘quiet horror,’ and mainstream fiction.

one short story every month.

Discover Author of the Week posted on Mondays!

AUTHOR OF THE WEEK  October 20

“I’m one of those people who doesn’t really know what he thinks until he writes it down.”

“Monsters are real, and ghosts are real too. They live inside us, and sometimes, they win.”

“Books are the perfect entertainment: no commercials, no batteries, hours of enjoyment for each dollar spent. What I wonder is why everybody doesn’t carry a book around for those inevitable dead spots in life.”

“The writer must have a good imagination to begin with, but the imagination has to be muscular, which means it must be exercised in a disciplined way, day in and day out, by writing, failing, succeeding, and revising.”

Stephen King (born 1947) is a best-selling American author of horror, suspense, science fiction and fantasy. His books have sold more than 350 million copies.  The Stand

, The Shining, Carrie, and It

.  His memoir, On Writing

, has become an inspirational read for writers. King has published 50 novels, some under pen-name Richard Bachman. With over 200 short stories published, King has received Grand Master Award from the Mystery Writers of America and the 2003 National Book Foundation Medal for Distinguished Contribution to the American Letters and the 2014 National Medal of Arts.

Author Ben Mears returns to ‘Salem’s Lot to write a book about a house that has haunted him since childhood only to find his isolated hometown infested with vampires. While the vampires claim more victims, Mears convinces a small group of believers to combat the undead.

Read an interview at The Paris Review, 2006. 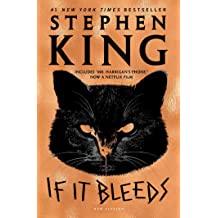 Please join me in my reading nook and discover an author on Mondays once a month at Reading Fiction Blog!

Browse the Index of Authors’ Tales above to find over 250 free short stories by over 150 famous authors. Once a month I feature a FREE short story by contemporary or classic authors. Audios too.

[Apologies that I’ve not been posting these past few months. I’ve been working on my newest novel Draakensky, which is in it final stages of writing. This story is supernatural, magical realism, and murder. Very exciting and all absorbing. More updates to come on this.]