Dead Howls of the Vourdalak

The Family of Vourdalak   by Aleksei Tolstoy ( published 1884) 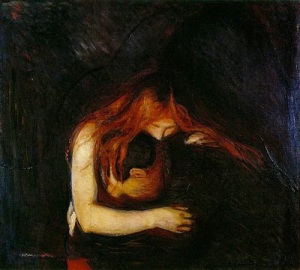 Let’s go to the castle of the Dowager Princess of Schwarzenberg in Hitzing, in the dark and silent woods of Vienna. We’ve dined on a rich meal with tasty wine; the kindly Princess has seated us around a hot fire; we are all in the mood for thrilling story telling.

“As for me, gentlemen, I have had but a single adventure … so strange, so horrible, and yes, true, that it will strike terror in even the most incredulous among you.” He takes a pinch of sniff and begins to recount his adventure.

“I should explain to you, mesdames, that vourdalaks, as the Slavic people call vampires, are believed in those countries to be dead bodies that come out of their graves to suck the blood of the living. Their habits are similar to those of all vampires, from any country, but they have one characteristic that makes them even more dreadful. The vourdalaks, mesdames, prefer to suck the blood of their closest relatives and dearest friends who, once dead, become vampires in turn. … The commissioners tell of exhuming bodies engorged with blood, which they stake in the heart and then burn in the village squares. The magistrates who were present at these executions attest — with oaths and signed statements — that they heard the dead howl at the moment that the stake was plunged into their heart.”

The Marquis recounts his travel to a Serbian village where he finds lodging at the home of a man named Dorde and his wife and children. The Marquis learns that Dorde is awaiting the return of his father Gorcha who has gone off hunting. Gorcha left a warning to his son Dorde that if he does not return in ten days, do not let him into the house as he will have turned into a vourdalak. Meantime the Marquis falls in love with Sdenka, the lovely young  sister of Dorde. When Gorcha does return, the story takes a wicked turn into delicious encounters with the vourdalaks.

This short story was adapted for a film in 1963 titled The Black Sabbath that included three short stories: The Telephone (sexy ghost story about a prostitute, Rosie), The Drop of Water (by Chekhov, classic dark and shadowy ghost story), and Wurdalak (vampires) starring Boris Karloff as Gorcha. I watched the film. Vintage horror at its best. Loved it.

Alexei Tolstoy (1817-1875)  was a poet, playwright and novelist, second cousin to Leo Tolstoy. His historical drama trilogy The Death of Ivan the Terrible , Tsar Fiodor Iannovich, Tsar Boris are considered to be a part of the classic Russian literature of the 19th century. His first work of fiction was in 1841, The Vampire.

Watch the film The Black Sabbath (Wurdalak with Boris Karloff on YouTube at DailyMotion.com).

Photo Credit: First image above is by Edvard Munch, The Vampire, 1893.

The Return of Andrew Bentley  by August W. Derleth and Mark Schorer (1933)

May I invite you in … to listen. Can you hear the peet peet from the nighthawk? Can you recognize the gasping and gurgling cries from the river? What’s that movement in the shadowy distance of the trees? A caped, dark and hunched creature flattens itself against the vaulted doors of your uncle’s gravesite. Gleaming white fingers spread out.

You dash to your uncle’s vault. Who would dare tamper with the dead? Who!

Uncle Amos is a dabbler of the dark arts and a believer … of evil demons lured to earth by man’s ignorance, of souls isolated in space, and of an ever-present evil wrath. Uncle Amos lives in the rustic village of Sac Prairie, in an old homestead on the banks of the Wisconsin River, until his sudden death, at which time his nephew, Ellis, inherits house and properties—and must agree to the old man’s single demand.

Uncle Amos instructs Ellis, “Let no day go by during which you do not examine the vault behind the house. My body will lie there, and the vault will be sealed. If at any time you discover that someone has been tampering, you will find written instructions for your further procedure in my library desk.”

Written instructions. This is where it really gets good. The Return of Andrew Bentley is not just a ghost story as you might expect. This is quite a thrilling story with young Ellis struggling to protect his dead uncle’s body, maintain his own sanity and safety, and avoid dipping himself into the blackest of arts.

I wish I could provide you with a direct link to the actual short story, but I could not locate a single online read anywhere, which means the copyright is not in public domain.

I did locate a video from Boris Karloff’s Thriller Theater made in 1961, vintage black-and-white and with a bit of melodrama that is so charming of that time, complete with sinister organ music. The script is written by the talented and famous Richard Matheson. And you might enjoy some of the amazing outdoor photography with horse and carriage scenes.

If you want to read this short story (I found my copy in an old anthology from 1941), 25 Modern Stories of Mystery and Imagination, Editor Phil Stong, Garden City Publishing Co., Inc. The story is also in Famous Ghost Stories by Editor Christopher Cerf, published by Vintage NY.  Both books are on AbeBooks.com or try your local library.

And I found this commentary by Peter Enfantino and John Scoleri that might be an interesting addition to your evening with The Return of Andrew Bentley.

A quick word about the author August Derleth who collaborated with Mark Schorer to write this shortie. Derleth, a prolific and versatile writer (over 3000 works published in 350 magazines) co-founded  Arkham House, publisher of Lovecraft’s stories, Blackwood’s and others. Some of his literary influences were not only Lovecraft but also Thoreau, Emerson, A.C. Doyle, and Robert Frost. Derleth invented the term “Cthulhu Mythos” for Lovecraft’s fictional universe.

NOTE:  Just in case you missed this announcement, my supernatural novel, The Dazzling Darkness won Joel Friedlander’s Ebook Cover Award for Fiction, cover designer Gina Casey. Many thanks to  Gina for an award-winning cover.