Enoch says, “Get the Hatchet!”

This is a nightmare tale, little bit of black humor, and a lot of creepy business. Seth is a young man with a serious problem. A creature lives on top of his head. No one can see this creature. No one can hear him. No one can catch him. His name is Enoch. And while Enoch spends a lot of time sleeping on Seth’s head, during Enoch’s wake time he orders Seth to kill people. “Get the hatchet!”  Hmmmm, yes, this story is not only weird, but demonstrates a macabre justice with a hefty slice of gluttony. 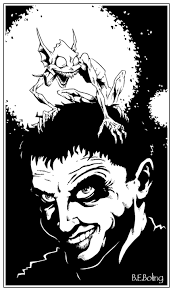 Read the short story  Enoch with illustrations in Weird Magazine at UNZ.org

Roberts Bloch was part of the Lovecraft circle and was heavily influence by him. Today most of us know Robert Bloch from  his novel Psycho, which inspired Alfred Hitchcock’s most famous horror film of the same name.

Listen to another of Robert Bloch’s short stories, audio (30 minutes) of The Hell-bound Train, published in 1958 and won the Hugo Award for Best Short Story in Fantasy:  https://www.youtube.com/watch?v=GybC7BBrg2s

Other novels by Robert Bloch: 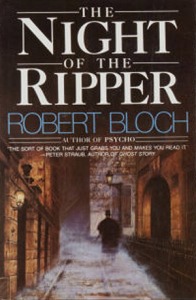 Defying Death, Bloody Jack Is Back 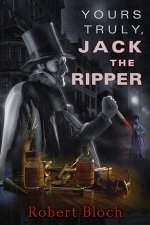 I’m not a butcher, I’m not a Yid, Nor yet a foreign skipper,
But I’m your own light-hearted friend
Yours truly, Jack the Ripper

This little poem is attributed to Jack the Ripper, reportedly written in 1888. We all know Jack as the elusive madman who butchered five prostitutes in the Whitechapel section of London. Jack’s narcissistic blood lust will forever haunt us. The Ripper disappeared quite suddenly in 1888, leaving the London police completely baffled—and history to guess about his identity and destiny. Scotland Yard presumed Jack died suddenly since the brutal murders did stop … or did they?

Robert Bloch, author of the novel Psycho, 1959 (Hitchcock made it into the famous film) can further chill our dark curiosities with his short story, Yours truly, Jack the Ripper. Here is the premise of Bloch’s story. What if … Jack is still alive today?

What if … by some magical black art, the Ripper offered his victims as blood sacrifices to the eternal dark gods and—incorporating lunar rhythms of power—Jack was granted eternal youth?

Ahaa, you say? The killer immortal? Let’s reach out and suspend disbelief.

Sir Guy tells Carmody, “I’m on the trail of Jack the Ripper … I think he’s here.”

On Jack the Ripper’s trail, over fifty years later? In Chicago, no less. Sir Guy is absolutely certain of Jack’s location. He even predicts the Ripper will strike again in this very city. He insists, “John Carmody, you and I are going to capture Jack the Ripper.”

Block writes a highly readable narrative with lively dialogue and a  fast plot. The Chicago streets shiver with fog, lurking shrouds, and shadowy alleys.  Dreaded fears mount at the corner of Twenty-ninth and South Halsted.

And here’s a bonus, Boris Karloff’s Thriller Theatre presented a film of Bloch’s short story. Watch it here (about 50 minutes), done in black and white and deliciously vintage.

Do leave a comment. Even a two-word review will do.

Tagged as Hitchcock, Jack the Ripper