If you could build a bridge between the living and the dead, would you? In Tieck’s Wake Not the Dead, Walter is in despair. His loving and beautiful wife Brunhilda (love that name) is dead and buried. When we begin this story … “Wilt thou for ever sleep? … Walter’s lamentations over his wife’s death touches deeply. The prose is somewhat formal but wonderfully poetic and for those who love Gothic literature with all the traditional flavors, this is a stunning if not horrific tale.

Our melancholy Walter remarries (Swanhilda) and has children, but he is still haunted by the absence of his lovely Brunhilda. One day, in the neighboring mountains, Walter meets an old sorcerer. Desiring to bridge death with life, Walter employs the magic of this sorcerer to restore his lost Brunhilda.

“Then be it even as thou wishest,” answered the sorcerer; “step back.”

The old man now drew a circle round the grave, all the while muttering words of enchantment. Immediately the storm began to howl among the tops of the trees; owls flapped their wings, and uttered their low voice of omen; the stars hid their mild, beaming aspect, that they might not behold so unholy and impious a spectacle; the stone then rolled from the grave with a hollow sound …”

This story is full of atmospheric conjures as Tieck (1773-1853) wrote a suspenseful and vivid tale. His work as a well-known German romantic poet colors every scene. I must mention that there is some controversy that the true author of this story was Ernst Benjamin Raupach (1784-1852), written in German Lasst die Toten ruhen. I suppose we shall never know for sure who originally wrote Wake Not the Dead or who possibly stole it. I like the mystery behind the authorship though and hunted for just the right portrait of each author. From the expression on their faces below, can you guess what they might say to us about the authorship? Hmm, what a fascinating ghost short story that might make in itself: the accursed struggle between Johann and Ernst, each claiming to be the creator of Wake Not the Dead. Maybe that’s my next short story! 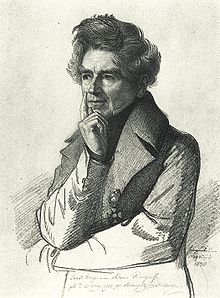 Listen to the Librivox Recording by Morvan Scorpian.

If you want to read more of Tieck’s work (and I do recommend it), try Tales from Phantasus of Ludwig Tieck: The Mysterious Cup, The Elves, The Love-Charm and many more at Gutenberg.org.