The Supernatural at the Old Manse

Between the Darkness and the Dawn,   Whistling Shade Literary Journal 2013 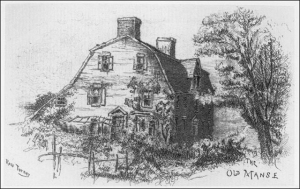 This holiday weekend I’m off, but still wanted to give you a tale of terror, so how about a historical ghost story from … yours truly.

Do you believe in synchronicity? Synchronicity is the experiencing of two or more events as meaningfully related. Do you believe in ley lines? Lines of energy, or energy grid, between ancient monuments or natural bodies of water, rocks, mountains, Stonehenge, Pyramids, etc., discovered by archaeologist Alfred Watkins (many scientists debate the existence of ley lines). Still, many believe ley lines are scientifically verifiable and are sacred earth energies where spirits can enter the earth’s atmosphere–and that we are naturally drawn to these ley lines. 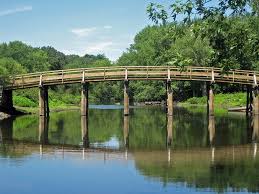 What’s most interesting to me is that when I wrote this short story back in 2010 and 2011, I had no idea there were ley lines discovered and confirmed at the Old Manse in Concord. During the creative writing process the ley lines just naturally appeared in the story. Two years later, upon visiting the Old Manse in October 2013 to drop off the Whistling Shade Literary Journal copies for their gift shop, I met with the director of the Old Manse. He had read my story and asked me how I knew ley lines were discovered on the property because it had not been publicized. The truth is, I didn’t know it. At least not in my own conscious mind, but then synchronicity often functions at the subconscious level. I gave a real chuckle to myself when the director showed me where the ley lines on Hawthorne’s property were confirmed (across the back lawn near a favorite rock where Nathaniel and Sophia often sat for tea). Of course, I probably don’t have to tell you that the reason they had the property and house tested for ley lines was because of the supernatural events that are frequently occurring at the Old Manse.

You can read Between the Darkness and the Dawn here at Whistling Shade Literary Journal.

Please leave a comment! I’d love to hear  your reaction to this short story.

What is Between the Darkness and the Dawn?

You know that moment when the softness of the night fades and the day peeks open to the rise of the sun? There is a fleeting time between the darkness and the dawn. What if, in that sliver  of light, the past could shutter open? What would you experience? What glimmering shadows would you see?

My latest short story Between the Darkness and the Dawn is now published live on the Whistling Shade Literary Journal web site. This is a ghost story set in the Old Manse, the home of Nathaniel Hawthorne in Concord, Massachusetts.

I hope you’ll read this historical supernatural mystery with literary flavor and ghostly atmospherics; I would so love a comment or a review:

Between the Darkness and the Dawn  by Paula Cappa